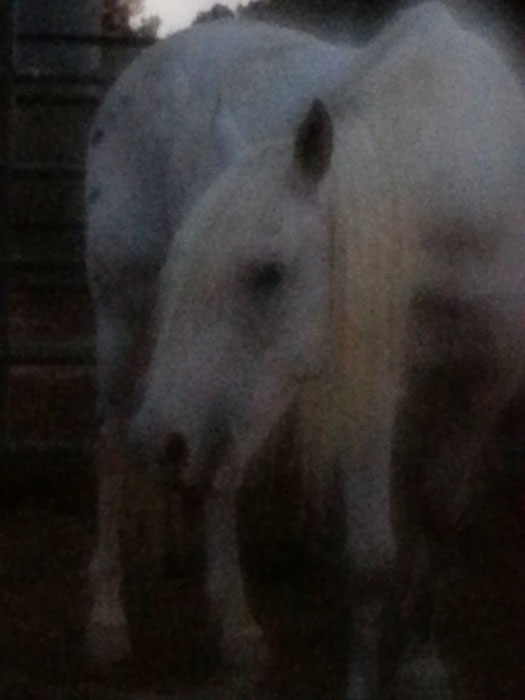 In my world it’s the horses that come and go, the overnighters passing through from way out there to way over somewhere else, to the big show, to the rodeo, or from up in the cold north to winter where it’s warm. I rarely see their people. It’s Las Vegas, they go to a buffet and do the Vegas thing then are back by their rig in the morning with coffee in hand. I wave as I leave for work. They wave back.

At dusk when the gate is locked and everyone’s gone home I go out and meet their horses. They tell me their names, the real name that their Mama gave them, and sometimes late at night on dark moons they tell me their secrets.

I live here on this quiet acre and a half with the stable out in front of me and the desert beyond. The horses who live here are my little horse family. I’ve known them a long time, two of them are mine. Visitors stop by throughout the year, some breeds I’ve only read about. We had a Gypsy Vanner once. He was all thunder on the ground and mischief in his eyes. I’ve never met one in person.

There have been colors I’ve only seen on charts in old library books or in the Breyer horses I gave away when I thought I was too grown up, then bought them all back again from thrift stores or eBay, a dark golden palomino with big lacy dapples, a chocolate palomino, cremellos, and a champagne Tennessee Walker Stallion with kind amber eyes.

On a rare night last fall a cloud covered the whole valley and kissed the ground like fog does in San Diego. I walked out to turn on the big yellow light in the arena and noticed a visitor in the mare barn. He was a silvery white fairy tale in the dark with a long rippled mane patiently dining on the hay they brought for him. The other horses were eating quietly or already asleep. I leaned on the rail for a while watching him, hoping he would talk to me. He didn’t say where he was going or where he had been but in the tickling mist that night he looked up at me and shared his secret.

Today’s Prompt: Who’s the most interesting person (or people) you’ve met this year?

I'd Love to Hear From You! Cancel reply